To share your memory on the wall of Mary Jo Briggs, sign in using one of the following options:

Mary Jo Briggs was born on February 7, 1930 in rural Marcus, Iowa, the daughter of Vern F. and Mabel (Smith) Barnes. She attended her first eight years of school at Amherst #8 country school south of Marcus. Mary Jo graduated from Marcus High School in 1947. The following summer she began working as a clerk at Clarkson’s Grocery in Marcus. She worked there until she was united in marriage to Donald Briggs on June 20, 1948 at Grace United Methodist Church in Marcus.

Mary Jo and Don lived and worked in the Marcus area until 1958 when a job offer came to her husband which moved them to New Hampton, Iowa. While living there, Mary Jo was a part-time bookkeeper for a local Purina Feed service and she also worked evening shifts at the Crystal Mill Truck Stop south of New Hampton. In 1968, the family returned to Marcus to live near their parents and grandparents. Don was now in construction work which took his crew to various areas all over the state of Iowa building waste water and sewage plants.

In 1970, she began working for the Marcus school as a part-time dining room helper. She later became a full time cook for the school until 1978. In March of 1980, she accepted a position as clerk at the Casey’s Store in Marcus where she worked until August of 1985.

Mary Jo then retired but still kept busy learning to quilt and she also enjoyed babysitting for various friends and family in the Marcus area. She was a member of Grace United Methodist Church. She participated in United Methodist Women and served in many of its offices. Mary Jo played the piano for Sunday School children and the U.M.W. meetings. She was a member of the “Holy Tearers” church ladies group that tore rags at the Work Activity Center in Cherokee. Mary Jo volunteered as a helper-mentor at the middle school and elementary school in Marcus for several years. She loved to bowl and joined the Tuesday afternoon ladies league. A trustee on the Marcus Public Library, Mary Jo was a strong supporter of children reading books and learning to be good readers. She also served as an active member the Heartland Care Center Auxiliary. After participating in all of these activities, she liked to garden and enjoyed preparing canned and frozen foods for her family.

She was preceded in death by her parents, husband, Don on March 25, 2004; a grandson, Austin Moore; son and his wife, Gary and Kathy Briggs; brother, Don Barnes; half- brother and his wife, Dean and Lu Barnes; a half-brother, Chester Barnes; a half-sister and her husband, Grace and Louie Morales; and brother-in-law, Dave Nelson.

Memorials may be directed to the Marcus Community Center or Grace United Methodist Church.
Read Less

To send flowers to the family or plant a tree in memory of Mary Jo Briggs (Barnes), please visit our Heartfelt Sympathies Store.

We encourage you to share your most beloved memories of Mary Jo here, so that the family and other loved ones can always see it. You can upload cherished photographs, or share your favorite stories, and can even comment on those shared by others.

Posted Dec 02, 2020 at 09:37pm
I will always treasure memories of grandma, her gardening, her baking, her laughter, and her beauty. I can still hear her giggling in my ears and smell her delicious peach pies. And, we still quote her around my house echoing those endearing and oft-repeated words, “well I should say!” Love and miss you, GG.
Comment Share
Share via: 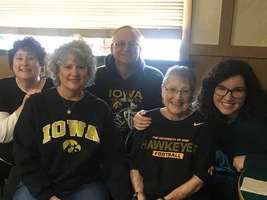