To share your memory on the wall of Fred Wilkens, sign in using one of the following options:

Print
Fred Wilkens, 85, of Marcus, Iowa passed away on Tuesday, December 15, 2020 at the Heartland Care Center in Marcus. For the protection of family and friends, a memorial service will be held at a later date.

Fred Henry Wilkens was born... Read More
Fred Wilkens, 85, of Marcus, Iowa passed away on Tuesday, December 15, 2020 at the Heartland Care Center in Marcus. For the protection of family and friends, a memorial service will be held at a later date.

Fred Henry Wilkens was born March 14, 1935 to Chris and Mildred (Specht) Wilkens. Fred was raised on the family farm north of Marcus, the oldest of 4 siblings. Fred was Baptized into his faith and Confirmed at Trinity Lutheran Church, rural Marcus.

Fred graduated from Marcus High School in 1953. As a young man he farmed with his father raising poultry and hogs. Over the years, Fred also worked for the Weart and Lysaght Lumber yard, served as the Marcus night cop, and assisted Nelson Funeral Home. He drove school bus for 18 years and began work with the Postal Service in 1965.

Fred married Bonnie Jean Brooks on July 19, 1964 and they made their home in Marcus where the couple raised two children, Paul and Diane.

Fred loved Marcus and was active in the community his whole life serving on various boards and committees. He was a charter member of the Marcus Jaycees, served as a City Councilman for several years, and was an active member of the Marcus Fire Department for 22 years. After retiring as the Marcus Postmaster in 1996, he remained active in the community by serving on the Marcus Amherst Cemetery Board as the sexton and generally helped where needed. He promoted the Heartland Care Center and volunteered to mow that property for several years. (His family knows that also gave him the chance to enjoy driving his C-Farmall.) He enjoyed bus tours with the travel group “Alice and Jack”, and the daily coffee crowd at the Big Booth or the Marcus Junction. One of his favorite times of the year was always Marcus Fair time.

He loved Marcus history and was known by some to be a bit of a Marcus historian. Growing up just north of the tracks he would share stories of Marcus railroad history and the steam engines of his youth. He made sure his kids rode the final passenger train through Marcus in the early 1970’s. Fred often shared stories of train rides to Mississippi and Ohio to drive new buses home for the school district. With fondness, he would also talk of the school bus kids he transported and activities that transpired around town as the Marcus night cop.

Fred loved his grandchildren and often mentioned how proud he was of their accomplishments.

Both Fred and Bonnie entered the Heartland Care Center in October of 2016. Fred passed peacefully at the Care Center on December 15, with his wife and family at his side.

Fred was preceded in death by his parents; and an infant sister, Jeanne.
Read Less

To send flowers to the family or plant a tree in memory of Fred Henry Wilkens, please visit our Heartfelt Sympathies Store.

There are no events scheduled. You can still show your support by sending flowers directly to the family, or planting a memorial tree in memory of Fred Henry Wilkens.
Visit the Heartfelt Sympathies Store

We encourage you to share your most beloved memories of Fred here, so that the family and other loved ones can always see it. You can upload cherished photographs, or share your favorite stories, and can even comment on those shared by others.

Posted Jan 21, 2021 at 01:00pm
I always looked forward to visiting with Fred and Bonnie and thought of them as my grandparents when meeting them at HCC. It always put a smile on my face seeing them each morning when getting to work and each day on my way out. Their laughs, smiles, and conversations all meant so much and will always stick with me. Praying for comfort and peace during this difficult season.
Comment Share
Share via:

Posted Dec 21, 2020 at 05:32pm
Got to know Fred when I worked in Marcus. Was a very good postmaster and was very nice to a kid who wasn't from Marcus. Enjoyed going to get the mail and visiting with him.
Comment Share
Share via:
KA

Posted Dec 18, 2020 at 01:12pm
Such a great loss to his family. Fred was a great man and will be missed my many. Prayers for Fred's family.
Comment Share
Share via:
LK

Posted Dec 18, 2020 at 09:09am
In the 60's my dad and i worked at Nelson Hatchery, there was a chicken laying barn north of the rail road tracks. Twice a week Fred would come with a tractor and spreader as we cleaned out the pens. Always enjoyed seeing Fred and talking to him. RIP Fred, you was some one very nice. Larry Kobberman Remsen, IA
Comment Share
Share via: 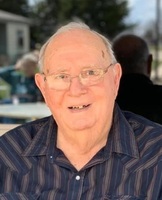