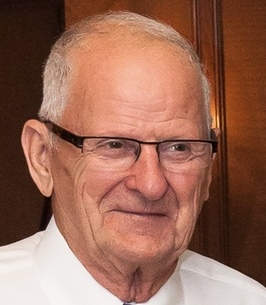 Le Mars, Iowa – Clayton L. Holzman, 90, of Le Mars, Iowa passed away at his home on Monday, July 18, 2022, surrounded by his family. Mass of Christian Burial will take place at 10:30 a.m. on Friday, July 22, 2022, at All Saints Catholic Parish-St. Joseph Church in Le Mars. Fr. Bruce Lawler will celebrate mass. Burial will follow at Calvary Cemetery in Le Mars. Visitation will begin at 2 p.m. on Thursday with a Knights of Columbus Rosary at 5:30 p.m. and a scriptural prayer service at 7 p.m., all at the church. The family will greet friends from 5-7 p.m. There will also be one hour of visitation at the church on Friday prior to the funeral.

Clayton Leo Holzman was born on September 8, 1931, in Le Mars, Iowa, the son of Frank and Josephine (Kemp) Holzman. He attended St. Joseph Catholic School in Le Mars, graduating in 1949. Following graduation, Clayton enlisted in the United States Army. He received his basic training at Fort Indiantown Gap, Pennsylvania. The remainder of his service was spent overseas in Japan. He received his Honorable Discharge in 1954 and returned to Le Mars.

Clayton and Lois Brouillette were united in marriage at St. Joseph’s Catholic Church in Salix, Iowa on April 28, 1956. Clayton worked for Pew Motors until 1960. He then took a position as a feed and seed salesman with Dr. Macdonald’s. Following his time there, he represented Renze Seed as a salesman. During his entire working career, Clayton also farmed.

He was a member of All Saints Catholic Parish in Le Mars and the Knights of Columbus. His grandchildren liked taking car rides with their grandfather. Clayton also enjoyed playing Solitaire and cards with his family.

Memorials may be directed to Then Feed Just One, 309 8th ST SW, Le Mars, Iowa 51031, All Saints Catholic Parish or Gehlen Catholic Schools.