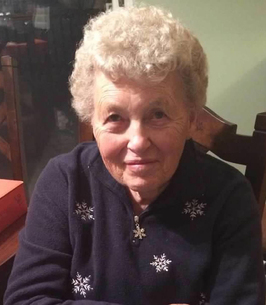 Mae Louise Kilker was born on May 8, 1936, in Beresford, South Dakota, the daughter of Everett and Sena (Twite) Lundquist. She attended school in Sioux City, Iowa, graduating from Leeds High School.

On October 1, 1954, Mae and Edward Albert Kilker were united in marriage at St. John’s Lutheran Church in Le Mars. They made their home on a farm north of Le Mars. In early years, Mae was an elevator operator at the Badgerow Building in Sioux City. Along with assisting Ed on the farm, Mae worked at Aalfs Manufacturing, Ben Franklin and Harker’s Meats in Le Mars.

Mae was a member of St. John’s Lutheran Church in Le Mars. She enjoyed spending time with her family and her grandkids knew her as “Popsicle Grandma”. Mae collected dolls and looked forward to gambling trips and appreciated her pet cat.