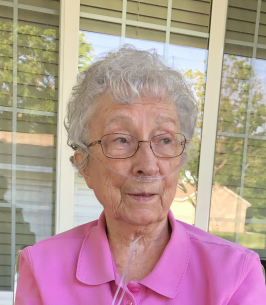 Le Mars, Iowa - Jeannine L. Downing, 91, of Le Mars, Iowa passed away on Saturday, August 13, 2022, at the Good Samaritan Society in Le Mars. A Celebration of Life Service will take place at 10:30 a.m. on Saturday, August 20, 2022, at the Mauer – Johnson Funeral Home in Le Mars. Rev. Dr. Michel Okitakoyi Lundula will officiate. Private family burial will follow at Hillside Cemetery in Merrill, Iowa. The family will be present from 9:00 to 10:30 a.m. on Saturday to greet friends.

Jeannine Lois Downing was born in Le Mars, Iowa, on June 17, 1931, the daughter of Wallace and Eileen (Hauser) Hemphill. She was raised in Le Mars, attended Le Mars Community High School and graduated in 1949. She briefly attended Westmar College. In June of 1950, she was introduced to a veteran, Edward Downing, who also attended Westmar College on an athletic scholarship. One year later, the two were married and were together for 62 years until Ed’s death in 2013. They were blessed with three children, Steven, Dianne and Douglas.

Besides her family, one of the things she was most proud of was her 30 years as a preschool teacher at St. George’s Preschool where she touched the lives of many children.

Jeannine’s family would like to thank the staff at Park Place, Good Samaritan Society, Hospice of Siouxland and Floyd Valley Healthcare and it’s staff for the wonderful care they gave her.

She was preceded in death by her parents; husband, Edward; a son-in-law, Tom Nelson; and a brother, Merlyn Hemphill.