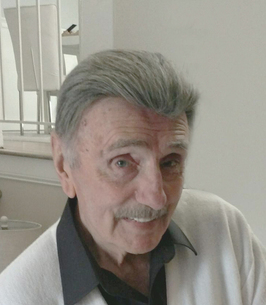 Jim G. Helms, 86, of Le Mars, Iowa, passed away on Saturday, November 19, 2022, at the Good Samaritan Society in Le Mars. Mass of Christian Burial will take place at 2:00 p.m. on Monday, November 28, 2022, at All Saints Catholic Parish – St. Joseph Church in Le Mars. Father Bruce Lawler will celebrate Mass. Burial with military honors by Wasmer Post #241 of the American Legion will follow at Calvary Cemetery in Le Mars. Visitation will begin at 4:00 p.m. on Sunday, November 27, 2022, at St. Joseph Church. The family will be present from 5-7 p.m. with a Knights of Columbus Rosary at 5:00 p.m. followed by a Chalice Presentation and a Scriptural Prayer Service at 7:00 p.m. Visitation will resume at 1:00 p.m. on Monday at the church.

James Gerhardt Helms was born on the family farm on January 25, 1936, to George and Margaret (Lawther) Helms near Randolph, Nebraska. He graduated from Belden High School in 1953, and then moved to Albany, Oregon to apprentice with his uncle who was a carpenter and cabinet maker. Jim became a journeyman cabinet maker before enlisting in the United States Army in 1955. He met the love of his life, Jeanette Schaefer, shortly before leaving for the Army. After completing his Army service, they were united in marriage on November 26, 1957.

Jim and Jeanette moved to Yankton, South Dakota where Jim went to work for Means Dry Cleaners. In 1965, he purchased his own dry- cleaning business, Vallet Cleaners in Le Mars and Cherokee, Iowa. Jim sold the business in 1973 and went to work for Harkers Wholesale Meat Company. In November of 1998, he retired after 25 years with Harkers as one of their top salesmen, earning numerous trips he and Jeanette enjoyed together.

Jim and Jeanette travelled most of the 48 states with their camper and enjoyed camping for over 40 years. Jim used the skills he learned from his uncle, Ernest Helms, and spent many hours in his workshop making furniture, clocks, gunstocks, bird houses and other items too numerous to list. He was a member of Wasmer Post #241 of the American Legion. Jim was a 4th Degree Knight with the Knights of Columbus and was a lifetime member of over 50 years. He was skilled at Rosary making beginning with Job’s tears he grew in his garden. He later changed to a simpler beaded Rosary so he could make more and often donated them to Gehlen’s Mission Honduras. Jim also took pride in being a Hospice volunteer and delivering Meals on Wheels. He also volunteered for many years at Queen of Peace in Sioux City where he took care of the grounds and served as a board member.

He will be lovingly remembered by his four children and their spouses, Gary Helms of Kansas City, KS, Ron and Julie Helms of Overland Park, KS, Kathy and Mike Ream of Westfield, IA and Bill and Pam Helms of Le Mars, IA; numerous grandchildren and great-grandchildren.

He was preceded in death by his parents; wife of 57 years, Jeanette Helms on September 12, 2014; a daughter-in-law, Rita Helms; a grandson, Dywane Lowrey; a great-grandson, James Kraft, Jr.; and brothers, Don and Dean Helms.