To share your memory on the wall of Bonnie Wilkens, sign in using one of the following options:

Bonnie Jean Wilkens was born on February 3, 1944 in Pocatello, Idaho to Harold and Rosalia (Helmbrecht) Brooks, and was the oldest of 3 siblings.

As a child, Bonnie attended schools in Round Prairie, Minnesota and in Bancroft, South Dakota before her family settled in Grand Meadow, Iowa in 1956, where her father was a school custodian and her mother a school cook. Bonnie was part of the first graduating class from the new Marcus High School in 1962. As a young woman, Bonnie worked at Floyd Valley Hospital in Le Mars, Iowa as a nursing assistant.

Bonnie married Fred H. Wilkens on July 19, 1964 at Peace Lutheran Church in Marcus. Bonnie was also baptized and confirmed into her faith at Peace Lutheran on December 6, 1964. Bonnie and Fred made their home in Marcus where the couple raised two children, Paul and Diane.

Bonnie very much enjoyed being a homemaker. She enjoyed gardening, flowers, crafting, and cooking. Family favorites include her goulash, Thanksgiving stuffing, and homemade banana bread. (Her banana bread recipe is in the Marcus Centennial Cookbook and it is amazing.)

After her husband retired, the couple enjoyed traveling with the travel group “Alice and Jack”. They enjoyed car trips throughout Iowa and nightly drives around Marcus were a part of the couple’s routine. Bonnie and Fred entered the Heartland Care Center together in October of 2016.

Bonnie loved and adored her grandchildren and was thrilled to have them visit. Sleepovers at Grandma’s house were a big deal.

She was preceded in death by her parents, her husband Fred on December 15th, 2020, her sister Mary J. Deters, and her brother Michael A. Brooks Sr.
Read Less

To send flowers to the family or plant a tree in memory of Bonnie Jean Wilkens (Brooks), please visit our Heartfelt Sympathies Store.

There are no events scheduled. You can still show your support by sending flowers directly to the family, or planting a memorial tree in memory of Bonnie Jean Wilkens (Brooks).
Visit the Heartfelt Sympathies Store

We encourage you to share your most beloved memories of Bonnie here, so that the family and other loved ones can always see it. You can upload cherished photographs, or share your favorite stories, and can even comment on those shared by others.

Posted Jan 21, 2021 at 01:08pm
Bonnie was such a sweet lady. I always enjoyed visiting with her and was always amazed by her artistic abilities. Of course, she would say that she wasn't good, but her finished projects always showed otherwise. I looked forward to hearing Bonnie's latest baking idea or baking inspiration ideas that she found in magazines. I will forever cherish the towels Bonnie made for us and think of her beautiful soul when using them. Praying for comfort and peace during this difficult time.
Comment Share
Share via:
N

Posted Jan 03, 2021 at 07:36pm
Thoughts and prayers for you all. Many fond memories with them years ago. They are at peace and in good hands.
Comment Share
Share via:
DG

Posted Dec 29, 2020 at 05:55pm
Bonnie will be missed by many. Growing up it was alawys a joy to go and spend time at Bonnie and Freds. She always had something yummy she baked. When it was time to leave she would be the first one crying saying goodbyes. I will cherish the memories they have left me. Keep up on the baking Bonnie until we meet again. Lots of love.
Comment Share
Share via:
SS

Posted Dec 28, 2020 at 12:51pm
Sorry to learn Bonnie has passed.. I think she and Fred were partners all the way and God has joined them again in heaven. Sympathy to all of the family. Steve and Linda Smith
Comment Share
Share via: 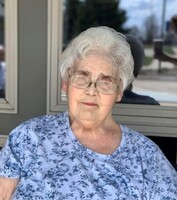